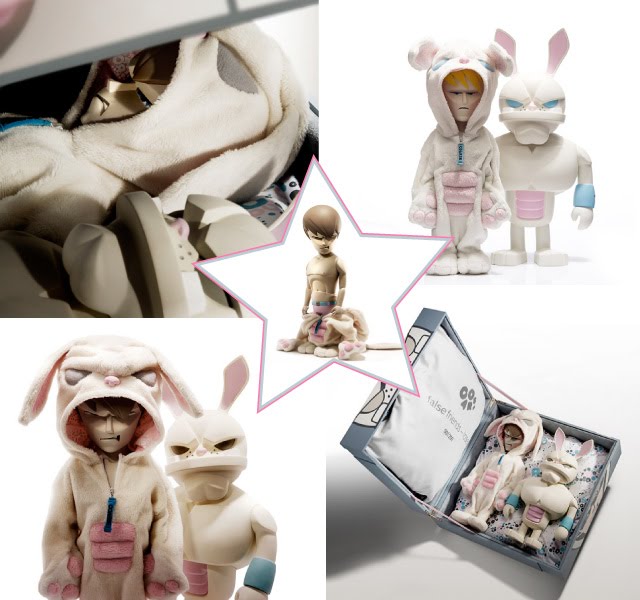 Do you remember the post about Coarse Toys? I will forgive you if you don't, but you have to check it out (here)! And right now some Coarse Toys updates - their new series called false friends. No sharks or blood, instead a rabbit that looks like the one from Donnie Darco, right? And also, would you look at that naked toy's six-pack.... Anyways, the toys seem to be so popular that new series is limited to 1 figure per household. God, just like in the communist times in Poland! I thought these days were long gone.
After the break there is a story about the false friends characters. 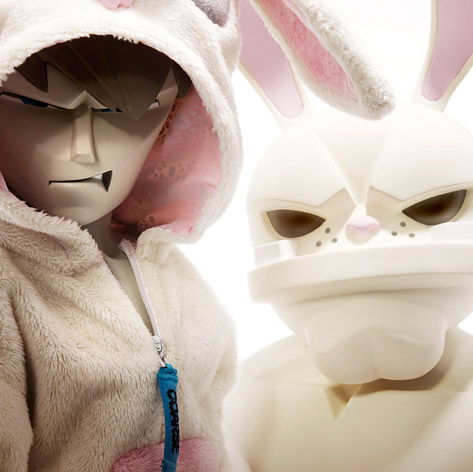 lost for life
The noop lies sprawled across the warm ground in a sticky mess. His eyes, still blurred, catch sight of the bright blue sky behind the vast tree leaves. Not too long ago the elastomer was a dark and hostile place. Now it sparkles again in the boldest of colors, fresh and juicy. Giant fruits hang from the branches of the trees. In one, well protected and nourished, the noop had time to grow. But now he is ripe, and he has hatched from his fleshy fruit shell.
He knows he can't stay out here in the open. Without the protection of cover he would be at their mercy. His shaky legs have never carried his body weight before. After a few attempts, he finally gets up. Standing, half stunned and dizzy, he gazes around and after a few seconds he slowly sets himself into an awkward walking motion.


He strays around for a while after leaving the forest, the sun has already turned his pale skin slightly pink and his innocent body feels pain for the first time. All of a sudden a scream smashes the pristine silence. Without hesitation the noop ducks down in the high grass nervously trying to spot where the sound came from - nothing. Out of nowhere it bounces right up into the sky like an oversized bullet. "YIEEEEEEEELP". Flying high above the noop's head, then stretching out its short legs to land softly and smoothly in the high grass a moment later.


The noop, curious and audacious, protrudes his head carefully to be able to examine the phenomenon that landed so close to him. Clearly not of his kind - a little shorter with 2 big ears flaunting in the wind. Giant teeth loom out of its mouth, its eyes menacing. With each of his body cells on alert, the noop's heart races for the first time in his short life. Instinct tells him that he is in great danger of this kind, he must raise his guard. Patient and without a sound the noop waits in the grass until dawn. When he raises his head again, the creature has gone. He is safe. For now at least.
Wandering the lowlands, the night has fallen. That which started almost inaudible, he is increasingly drawn to. The sound that would accompany him his entire life. The thundering of waves. Guided by this call in the darkness the noop finally reaches the beach. Jaded, he lies down. As soon as his face hits the cold sand, the noop is asleep. 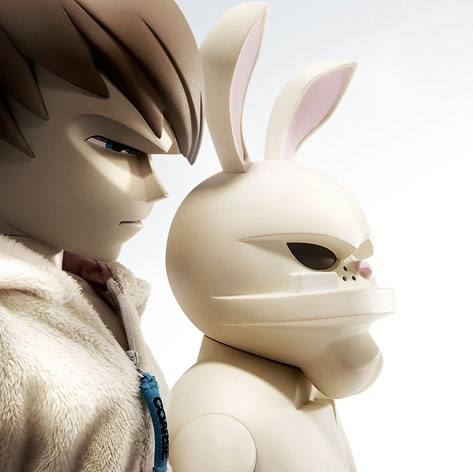 The spring sun is full of joy, and as it tickles the noop, he is torn from his spotless dreams. It takes him a while to remember where he is and what has happened. Dazed, he sits up. Staring out to sea with empty eyes.
After a while, the fog in his eyes dwindles and as he looks around, he notices something that lightens up his face. First a subtle smile emerges, a second later he begins to laugh. Down on the beach stands an old barrack, it must have been left by previous generations. A treasure without a doubt. His treasure. Only a few more steps and he can make it his own.
Awestruck, he opens the door. Without any windows, shadow hangs over the room. Dust particles dance in the rays of light which enter only through the tiny splits in the wall and in the shape of the doorway behind him, revealing just the corner of a stained mattress on a brittle steel bed frame. He enters the tiny shack, his eyes sweeping the room as they slowly adjust to the darkness.
His attention is quickly drawn to the jagged teeth of a shark head, sparkling against the rotten ceiling like stars in the blackest night. In the other corner he finds a lonesome chair with a neat pile of clothes and a pair of shoes on top of it. Almost as if someone before him had known he would come.


Still half blinded, he stumbles upon a large casket. He wriggles the catch open. Reluctantly reaching into the bottomless blackness inside, not knowing what to expect, his hand veers into lost space.


As he hesitates to go further, his hand sinks deep into the most heavenly soft fur. He exhales all of his fears. As he slowly pulls the suit out, it all begins to make sense. Calmly he steps inside, pulling it over his shoulders. The ears softly slap his face while he pulls the giant hood over his head. He needs to grow into the suit before it would really fit him, yet it feels so warm and muffled - it would keep him safe almost like the fruit that had shielded him not long ago. With a little smirk he begins discover his new appearance. Lifting a large paw to his face, he examines the velvety pads on his palm. He takes a few clumsy steps, nearly tripping over his own overgrown feet as he exits the barrack, contented with his precious find.

With hardly a foot out the door, something colossal is right upon him, he sees a flash of sky and a moment later his head hits the sand. As he comes around, the massive face of paw! is right in front of his. It has a huge playful grin and greets him with a hearty grunt. It gives him a youthful nudge before springing to its feet. The hyperactive paw! shakes its tail, bounces and gestures the noop to come and play.

The confused noop struggles to understand the strange sensation that overwhelms his body. Reflecting on his short life, it hurts to think that he has been alone all along. For the first time in his empty existence, he feels that someone truly seems to care about him. He longs to hold on to this warm feeling, so that he will never have to be alone again. And as long as paw! believes that they are of the same kind, the noop would not get hurt. But he has to make sure never to show his true face. Or everything could be lost.