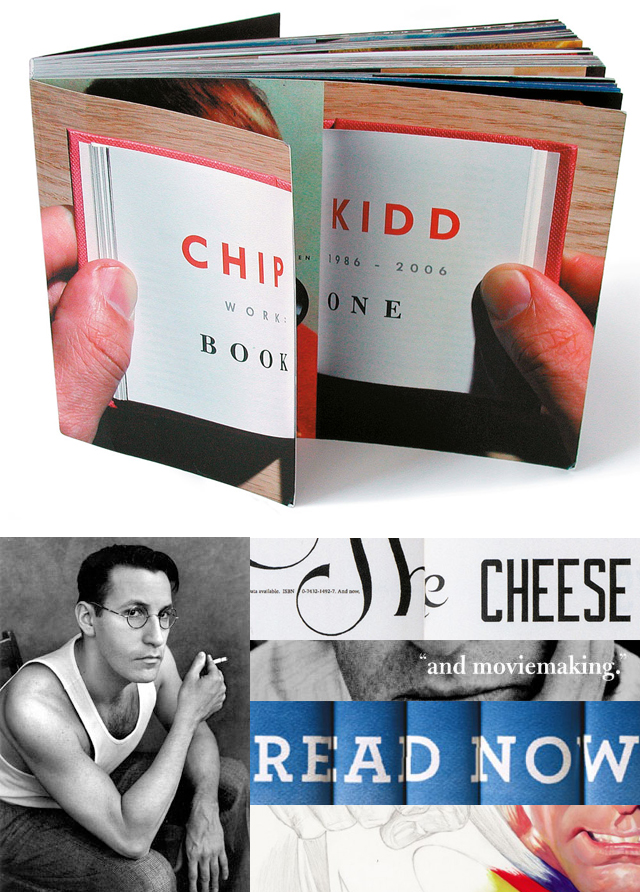 I don't know how to start this little piece on Chip Kidd, because so much has already been written about him. He is the guru of book cover design. As Veronique Vienne says, in her book titled simply "Chip Kidd", he is perceived as a "design demigod," an "inky colossus" and "the closest thing to a rock star" in graphic design. In 2008 he was listed on the famous TIME magazine list of 100 most influential people (and he was listed higher than Hillary Clinton or David Beckham). And I'm going to see his lecture tomorrow.

Chip Kidd is 47 years old. He designed his first cover in 1986, which means he's been designing for 25 years now. His covers follow one general rule: they're supposed to catch your eye, intrigue you, give you a glimpse of the world pictured by words in the book. But he strictly avoids one thing: being literal about the book's subject, as he thinks it is insulting to the reader. His covers are like a riddle then, presenting one puzzle that only falls into place when you actually find the other pieces in the book.


As a result of working with book authors, reading piles of manuscripts and observing the writing process, Kidd decided to give a shot to writing himself. He is the author of The Cheese Monkeys (check the short excerpt of the story) and The Learners, which were well received by critics and became bestsellers. I think it gives him even better understanding of what message would the author want to convey with the book cover, as he knows the other side of the story. Working on more than 70 book covers a year, Kidd completed more than 1500 designs (it's a  number he's been giving for quite a while, so it must be higher). Is it difficult to come up with so many ideas? Kidd says the design process is "pretty simple, unless it becomes complicated." (via USA Today) 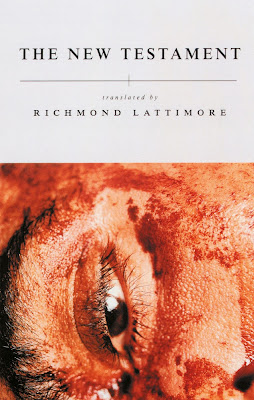 "If I am only remembered for one jacket I would pick this one. I really have to hand it to the publisher for having the balls to go with it, and thus getting screwed by the major chains who refused to carry it. I'd also like to thank the photographer for allowing me to use this image in this context."


Only once has a design landed him in trouble - not surprisingly, it involved a cover of the New Testament. Kidd wanted to use a photograph by Andres Serrano entitled Murder Victim Number Five. "To me it was perfect," he says. "The publishers went for it, but it was a total disaster for them - no religious bookstore would carry it." The reason, Kidd says, was not because of his cover per se, but because earlier, Serrano had made Piss Christ, a photograph of a crucifix immersed in his own urine, and so became persona non grata. 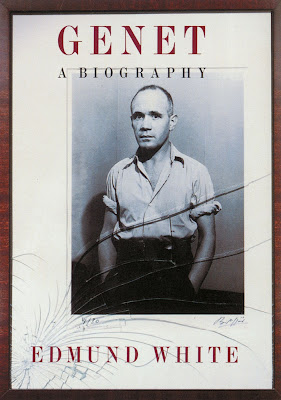 While in a bookstore in East Hampton, Kidd found this signed photograph of Genet by Brassai. The selling price of $3000 was too much, so Kidd persuaded the owner to rent him the piece. While being shipped to his office the glass broke and Kidd couldn't resist; he photographed it for the cover just as it was, because, he says: "The composition was so great, and Genet was such a rabble rouser". 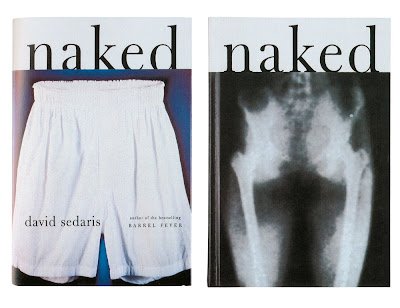 Sedaris confinded in Chip that his favourite aspect of the design is that when asked for autographs, he takes off the jacket and draws a penis on the x-ray. 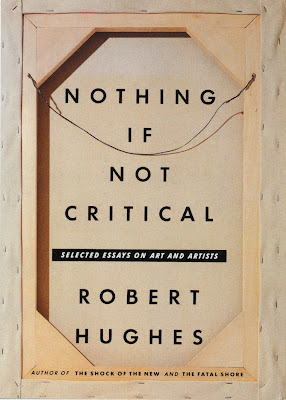 Using a painting to illustrate a collection of esseys on art and artists would have been too literal - and it would have made the book seem like a monograph on a particular artist. In contrast, the back of the canvas prompts the curiosity of the reader.


Robert Hughes, "Nothing if not critical"
from Veronique Vienne, "Chip Kidd" 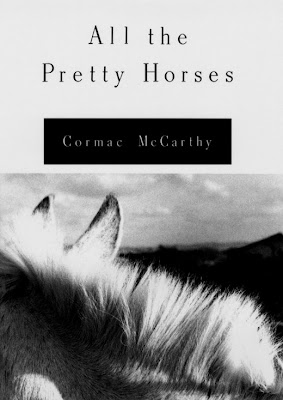 One of the things I learned while majoring in graphic design in college, that I've always taken very much to heart... The teacher one day drew an apple on the blackboard, and then wrote the word "apple" underneath it. He pointed to the whole thing and he said, "You should never do this." He covered up the picture and said,  "You either just have the word," then covered up the word and said, "or you just have the picture. But don't do both." It's insulting to the reader, or the viewer, or whoever. I think that's true. So what did I do on the cover for All the Pretty Horses by Cormac McCarthy? I showed a horse. I showed a pretty horse. 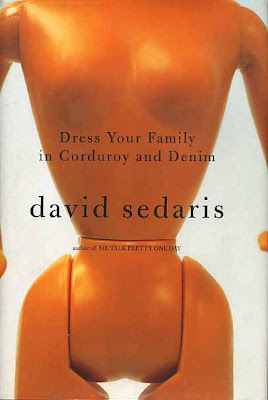 The most tiring-and yet the most rewarding-experiences are when you have to keep redoing it again and again, but what you end up with is actually the best thing. A perfect example of that is something I just did for the new via seeing & writing3  book [Dress Your Family in Corduroy and Denim]. I gave three ideas, and those didn't cut it, and then I gave two more, and I heard nothing, and I started doing photo research for a different job. Luckily, my design gene was secreting, and I saw an image that I thought would be perfect. It was great. Those moments are worth everything. They're some of the most pleasurable aspects of life-when you see something and the scales fall from your eyes, and it's like, "There it was the whole time. It just took until now to find it." 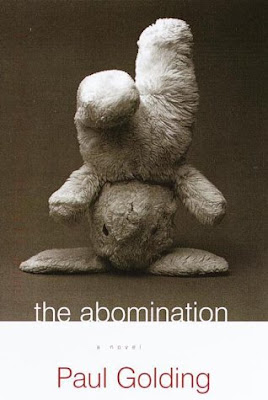 The black and whote photograph on the cover mirrors the unrelenting alienation of the main character, a child whoe sexual identity makes him an outsider. An innocent symbol of childhood stood on its head, this image was on a postcard sent to Kidd when he was in the middle of reading the manuscript.

At first, Paul Golding's agent refused to show the bunny cover to his client. Kidd tried a series of new approaches, but no one liked them. After eight months, the agent backed down and showed the original cover to Golding who was so taken by it that he wrote Kidd a two-page letter explaining why he loved it.

"It's not obvious," Vienne says. "But it's unsettling. The image makes you want to find out more. A nice cuddly thing turned upside down. It forces the reader's mind to make a leap." 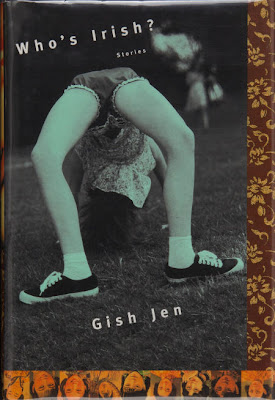 In these stories Gish Jen examines the immigrant experience and the different ethnic groups that share that journey. The cover photograph alludes to the fact that children, in all cultures, are always more adaptable than adults because they are willing to look at the world upside down. "It's hard to believe they approved this one", remarks Kidd, "but I think that it truly captures the spirit of the story, which is sort of impish free for all".


"The key here is spirit — to project the exuberant joy and rebellion of the kid in the story. I felt that if I could get that across, then I could pull readers into it." 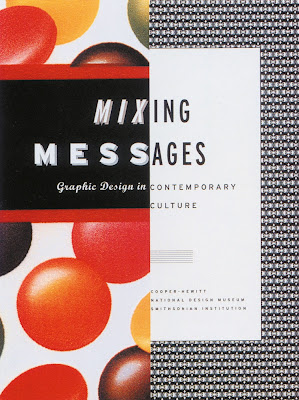 The two main camps in graphic design are deflty rendered here, the exuberance of pop commercialism versus the staid formalism of the academics. Kidd abandons his trademark horizontal split for the equally dramatic vertical one. 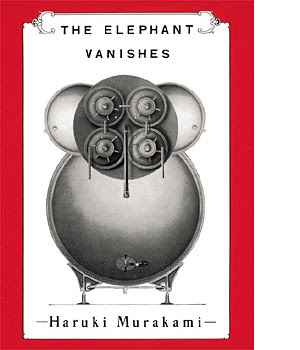 For this collection of stories that highlights the strageness of ordinary life, Kidd once again violates his cardinal rule of not being too literal, by putting an elephant on the cover. Hoever, the carefully composed mechanical pachyderm is a perfect visual metaphor for the surreal stories within. "The illustration on the front cover is a collage made of art that was swiped from a German beer vat catalog from the 1930s and the 1940s", says Kidd. "And don't ask me why I did this. I don't know. I just did." 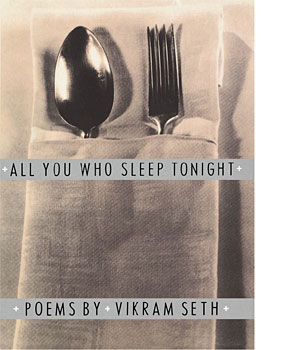 Seth's subject is everyday life seen through the prism of his startling poetry. The cheeky image of cutlery bundled up for a good night's sleep suggests that mundane scenarios sometimes have profound implications. "Thanks for the cutlery", commented the author when seeing his cover.

Vikram Seth, "All You Who Sleep Tonight"
from Veronique Vienne, "Chip Kidd"